Lovian wine is used worldwide in various countries such as Canada, the United States, Brunant and Adlibita but also in very famous wine-producing countries like France, Italy and Chile. Most of the wine sold in Lovia is comes from Lovia itself, Brunant or France.

Grapes have become a very popular crop over the course of the last few decades. The Wine Shop, is one of the few wine shops well know in Lovia. The production of grapes has been different from region to region in Lovia, making the classification of wine exotic. Oceana is the largest wine producing region and Sylvania and Oceana the most wine drinking regions.

Generally, more red wine than white wine is drunk in the country, except in the state of Seven.

Wine brewing in Lovia is very old, probably because American settlers brought vines along to Lovia around the years 1910 or 1920. Many independent farmers brewed known, normal and simple wines, especially with ships were brought to America or Europe. Real brands were not yet and the Lovian people do not drink wine because 95% of the wine that was brewed in Lovia between 1930 and 1960 went abroad.

In the 1970s, the wine in Lovia was considered very bright and the wine export market flourished as never before. The most famous wine brand from Lovia, Erasmus, was founded in 1979 and more and more farmers went to do grape farming.

Vuesock is a sparkling white wine made in Oceana originating from California chardonnay. These grapes were brought over to Lovia in the 1970s, where they modified over time to create a slightly different variety known as vuesock. Vuesock is often blended with other varieties such as Lovian muscatel (to creat sparkling muscat).

Bald Wine (Oceana: Valleeboar) is the local variety of Cabernet Sauvignon made in Oceana and Sylvania. The grapes were introduced in the 1930s to Lovia and grown in a valley of the Highlands by Dutch farmers who called their version "Dalwijn" (Valley Wine). It became known as Valleboar (translated) in Oceana but in Sylvania the name was corrupted to Bald wine. It is also known as Cabernet sauvignon, especially for higher-end wines. This is the most popular Lovian wine.

Other Lovian wine is made from blends of Vuesock and Bald wine and are made across most Lovian states. These vary from region to region and include sternaux, sparkling muscat, and still chardon.

The following table indicates how many liters wine are consumed by people of age 15 or higher per state.

The table was made by Minister of Agriculture Jhon Lewis, and Prime Minister Oos Wes Ilava on February 19, 2012, as part of their report on Alcohol consumption in Lovia.

A table of the total export of wine. This table doesn't include the wine that is made in Lovia and is sold in Lovia. The tabel is made by the Ministry of Agriculture and the Minister of Agriculture Jhon Lewis on March 1, 2012.

The most known wine shops or wine companies are: 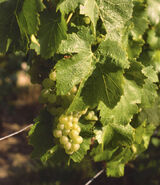 A wine cellar in the Sylvania Winery.

Ingmar Olsen, a Libertan-Lovian wine maker and director of Olsen's.

The logo of Olsen's in Maple Hills, Libertas.
Add a photo to this gallery
Retrieved from "https://nation.fandom.com/wiki/Wine_in_Lovia?oldid=182023"
Community content is available under CC-BY-SA unless otherwise noted.