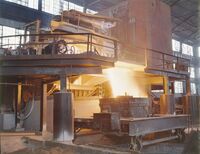 Adamas Steel Production is a Lovian steel company, located at the Old Port in the city of Newhaven. It is Lovias' oldest and largest steel producer, and one of the largest industrial complexes operating in Kings. It was first commissioned in November 2007, but officially initiated operations in January 2008. The company was started up by Ecompany, then Veprom, in order to expand their reach throughout various economic sectors. Since 2009 new techniques are being used by the company in their fabrication of steel and derived products so that pollution has dropped down to 26 percent of the pollution by the former production process.

Adamas' iron ore comes from mines just outside of Newhaven and is converted to pellets in the Pelletizing Plant (diameters: 8-10 mm). After being reduced in the Direct Reduction Plant and removed of oxygen, pellets are converted to sponge iron. Sponge iron and iron scrap is melted in electric arc furnaces, after which liquid steel is purified in secondary purification units. The steel’s chemical compound is designed by customer demand. Then, it’s transported to casting machines for slab production. After cooling, slab is rolled at the Hot Rolling mill, creating hot coils (thickness: 1.5-16mm). Some are sold; other go to the Hot finishing mill for complementary work and hot sheet transformation or the cold rolling mill to lower strip thickness to 0.18mm. Cold rolled coils are also dedicated for the Tinning, Galvanizing, and prepainting lines.

The Iron Plant Complex has 4 main production line units. Iron ores with large grains are converted by ball mills in the Pelletizing plant. After mixing with smaller grains and bentonite in blending machines it's changed to pellets (diameter: 6-25 mm) and screened by a two-story roller screen. Pellets solidify in an induration tunnel or furnace at 1280° C. The Lime Production Plant receives limestone, which is then calcinated in two rotary kilns at 780-1050° C. After screening, calcinated lime may be used in the Lime Plant, consumed in the Palletizing Plant, Briquette Unit or for industrial water production.

At the Direct Reduction plant, pellets are charged after misco-grain screening (less than 5mm). Two reducing gases (derived from cracking natural gas or methane, consisting of Co and H2) are injected into the furnace, combine with oxygen from the pellets resulting in CO2+H2O. Without oxygen, pellets become sponge irons. After screening, sponge irons are transferred to the Steel Plant. Sponge irons with a diameter less than 5 mm go to the briquette unit to produce briquettes (diameter above 25 mm). Then, they are transferred to the Steel Plant with the sponge iron.

The Steel Making & Continuous Casting Plant has eight electric arc furnaces receiving sponge iron and other additives. They are melted with about 15% scrap in the furnace, which has a capacity of 180-200 tons. The plant also has four ladle furnaces and a degassing vessel, used to adjust the final chemical mix and purity, as well as adjusting casting temperature. Additionally, there are four continuous slab casting machines, each having two arc casting strands (radius: 10.5 m). They produce the plant’s final product, called slabs. These slabs are 10 m in length, 20 cm in thickness and 65-188 cm (adjustable) width. Slab production capacity is 4,200,000 t/yr. Slabs are manually cooled and scrafed in the Slab Cooling & Conditioning plant.

Adamas export department has focused on increasing confidence in international markets. It has attained a just-in-time delivery plan for markets in Europe, Canada, USA, Latin America and South East Asia. To meet challenges confronting global markets and achieve new horizons, Adamas export department consolidated efforts to maintain the supply of hot rolled coils and sheets as it’s export priority plan as well as the export of other products to various regional markets.

During the first five months of 2008, about 1.9 M/t of Adamas products should be transported to customers, with 460,000 tons of products worth more than $500 million exported. Over 14,000 tons of special products including ST52, cold rolled products, car bodies, galvanized and color coated products were exported to various countries like Canada, Cuba, the United States, Italy and Germany.

Retrieved from "https://nation.fandom.com/wiki/Adamas?oldid=127917"
Community content is available under CC-BY-SA unless otherwise noted.