All Lovia Omnibuses, often abbreviated ALO, is a Lovian transportation company and a Walker Inc subsidiary. It was founded when Lovian Bus and the Noble City Bus Company merged and a fusion company became a Walker Inc company May 23, 2008. The original two companies were owned by the Pierlot Holding and managed by Pierlot McCrooke. The executive and administrative headquarters are based in the Old Harbor, while the buses and the technical headquarters are based in Transcity.

There are eighteen routes. Lovia is divided in several bus districts by ALO: 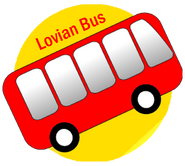 New logo
Add a photo to this gallery

Retrieved from "https://nation.fandom.com/wiki/All_Lovia_Omnibuses?oldid=118347"
Community content is available under CC-BY-SA unless otherwise noted.