The Congress is the unicameral legislature of the federal government of the Kingdom of Lovia. Congress was erected only in 2003 and has since become Lovia's most powerful political body. It is responsible for all bills and constitutional amendments being signed into law, as well as for several other (executive) powers. The Congress convenes in the Capitol in Downtown Noble City.

The term of the Congress is six months, as it is required to undergo an election twice a year: typically in March-April and September-October. In addition, extra elections may be held between the normal date. These are called special elections. The Congress selects a government to act as the executive branch of the federal government composed of ministries, of which its members lead. The current congress is the 2017 First Congress.

Lovian Congress is a unicameral parliament. All Members are elected to one and the same Congress and participate in the same debates and votes. There are no subdivisions or committees attached to Congress.

Congress does have two chambers, although they serve a different function than those of a bicameral parliament. The First Chamber is the proposal and debate room, in which Members of the Congress as well as plain citizens can propose bills or open a debate on possible bills. Only Members of the Congress are fully entitled to participate in the debates. It is the proposer's intention to gain support for his or her bill in the First Chamber, and to give Congress time to correct or amend the proposal.

The Second Chamber is where the bill goes if it is believed to be carried by a majority. All Members of the Congress have the duty to vote on the bill, either in favor ("pro") of it or opposing it ("contra"). Members can abstain from voting as a third option.

In 2013 the third Chamber Congressional Hall was built for the 2013 Congress, which is in use for debates on other Lovian political topics and question time for ministers. The first question time occured between MOTCs and Marcus Villanova, Minister of Labour.

The Royal Congress was a council of ten advisors to the young King Arthur II of Lovia, that ruled the nation almost entirely for six years, from 1887 to 1893. Its members were appointed by local leaders, who were chosen by the Lovian communities. In 1937, one year before his death, Arthur II established the Royal Legislative Council. From 1937 onwards, the council produced most laws passed by the king. Its members were appointed by the monarch himself, but he relied on the suggestions of the towns’ majors. Queen Lucy I, who succeeded the king in 1938, made less use of the council in the first years of her reign. In the mid-1940s, she appointed five more members to the council, which now had 14 members. By 1949, she foresaw the election of seven of those members by the citizen population of Lovia. At the time, the results of the first such election in 1950 were heavily debated.

After Queen Lucy deceased, and during the 1950s famines, the council was abolished on the people's request. Only in 1957, when King Arthur III ascended to the throne, order was restored. King Arthur re-installed the Royal Legislative Council, consisting of five personally appointed members and the five state governors or a representative of them. The council’s duties were limited to assisting the king in his political powers. Most bills were written by the RLC, but King Arthur made sure he passed no bills he personally supported. In 1982, though, he expanded their powers by giving them the formal right to overrule his decision if they found a eight-member majority against his decision. The tool has never been used, in part because King Arthur took a more democratic and progressive stance since then. It must be noted that a lot of policy-making occurred on state level, where Governors were elected by the people. They had great authority over their states. In the states’ histories, there have been occasions when the inhabitants eagerly wanted to give the Governors, who ruled on their own, less influence. Instead, many supported a national council or parliament.

In 1992 the democratization process finally begun, and only slowly. The RLC was expanded to 14 members, now including the three members elected by the people in Sylvania, two from Kings, and one from each other state, as well as six royal appointees, the majority being Noble City intellectuals. The new Royal Legislative Council had more tools to make policy and to pass laws. Still, as is customary in most monarchies, the ruling monarch had to sign each bill before it was considered approved.

Creation and first years of the Congress Edit

Finally, in 2001, the former Governor of Sylvania and then-member of the RLC Rick Frances proposed to establish a fully-democratic legislative body. It took more than a year to finalize the proposal, which was accepted by a unanimous majority in the council in mid-2002. In January 2003, the first nation-wide election polls were opened. The 2003 Congress consisted of fourteen members – the number was fixed by the law. There were five MOTCs from Freedom First (F1), the libertarian party led by Frances. F1 formed a coalition government with the Northern Lovian Party (NLP). Other parties in Congress were the monarchist King’s Party (three MOTCs), the Lovian Democratic Party (two) and the Lovian Communist Party (one). King Arthur III remained Member by Right until his death in 2007. The Frances Government followed a very libertarian course, allowing only minor government interferences in the economy and blocking most social legislation. The party and Frances were re-elected three more times. In 2004, they maintained their seven-member coalition and in 2005 they opened up the coalition for the Republican Alternative. In 2006 Freedom First again formed a coalition with the NLP only. In late 2006, a popularly supported social security bill was blocked by the government coalition, to the general dismay of the people. The King’s Party, the Republican Alternative and the Lovian Democratic Party all supported the bill. In the Federal Elections, 2007 then, F1 lost three seats to the opposition parties. The King’s Party held four seats and went into a difficult government coalition with the Freedom First party, who agreed to passing the bill if they could push through their libertarian agenda.

When King Arthur III died in August, Congress began a long argument over the continuance of the monarchy. It was unclear who would succeed King Arthur. The first in line was the young Prince Dimitri of Lovia. Both the libertarian F1 party, who believed Prince Dimitri was a classical liberal who would support their agenda, and the King’s Party favored his ascension to the throne. The Republican Alternative, the Oceana Christians, the NLP and the LDP instead wanted to consult the people in a national referendum. They failed to pass a motion requiring such a referendum and in November 2007, Prince Dimitri was crowned according to the Constitutional articles on the succession to the throne. By that time, the RA had abandoned their seats in Congress. The 2007 Congress did not pass any bills, with the exception of the new Constitution authored by the young monarch.

In the 2008 federal elections, none of the parties with a seat in Congress were elected (!). Only six MOTCs were elected, of which four were independents and two members of Yuri Medvedev's Progressive Democrat Party. Oos Wes Ilava, previously with the Oceana Christians, was the only member who maintained his seat, now as an independent. Analysts linked this unprecedented election event to the public unhappiness with the way Congress had worked in the past year, and especially in relation to the succession matter. The majority of the people had been in favor of the monarchy, which they felt was more on their side than the politicians were. Another factor was the retreat of Rick Frances, who felt "a new generation had to stand up for Lovia."

After King Dimitri's abdication in August 2008, then-Prime Minister Medvedev reformed the nation into a republican state. The 2008 Congress stayed on, but became inactive pretty quickly. When it failed to hold elections in January 2009, Medvedev re-appointed the Congress as the 2009 Congress. This Congress too failed to achieve anything. August 2, 2009, Medvedev spoke to the nation:

"Our country has lost all of its vividness and lust for progress. Since the king resigned, Lovia has become a victim of self-declared and local dictatorships. Lovia has lost its unity and democracy, the same values upon which our beloved country was founded."

Medvedev re-erected Congress as the 2009 Republican Provisional Congress, with the words:

"This government will serve a second term as government of national unity, meaning that she shall take up her duties, though without being chosen by general elections. I sincerely hope that together, we can build on the future and make Lovia great once again."

The re-activating of Lovia's Congress and its poor economy did not take place. Prime Minister and Chairman of the Congress Medvedev ceased activities by mid-August and would not return until early December 2009.

November 7th, 2009, Dimitri Noble re-entered the national stage. Within hours, Lovia regained strength and activity reached unseen levels. By popular agreement, Noble was recrowned as King of Lovia on November 9th. Prominent Lovians who supported the re-establishment of the monarchy included Pierlot McCrooke, Lars Washington and Oos Wes Ilava. They formed the 2009 First Provisional Congress, together with the king and August Magnus Donia. The new Congress passed a number of bills and organized federal elections in January 2010.

Yuri Medvedev was, surprisingly, re-elected as Prime Minister on a Progressive Democrats ballot. Other parties, which had emerged in November and December 2009, were also elected to the Congress: the Walden Libertarian Party and the Liberal Democrats. August Magnus Donia, previously in the 2003 and 2007 Congresses, was also elected. Oos Wes Ilava joined the Congress on a LOWIA ballot.

The 2010 Congress proved to be one of the most active in the institution's history. The Third and Fourth Amendments were passed in the spring. Around the same time, Andy McCandless (WLP) designed and executed the 2010 Highway Plan.

LOWIA fused with the Liberal Democrats shortly after the elections, and both McCrooke (then WLP) and Donia (LCP) resigned from Congress in April. On April 18th, the Progressive Democrats renamed themselves and became the Communist Party of Lovia (neo-marxist), the first straight-forward democratic socialist party to be in the Congress. Arthur Jefferson, previously with the party, then left it and became an independent. In May, mid-term elections were held, in which one member of each of these parties was elected: WLP, LD, CPL.nm, NLS and LLCP, as well as one independent. In the summer, a number of changes occurred. The Walden Libertarian Party made a shift to the left and abandoned its libertarian principles, and was now simply named Walden. Marcus Villanova (LLCP) immediately joined the party, making it the shared second largest faction in Congress. Ilava (LD) had left his party and re-founded LOWIA as the Conservative Christian Party of Lovia.

During the short republican era:

After the restoration of the monarchy:

After the Lovian Civil War:

Clickable timeline showing the historic MOTCs since the signing of the new Constitution under King Dimitri's reign until the final small 2011 Provisional Congress. Smaller congresses with abolished in favor of a one-hundred member congress in the 2011 State Reform. 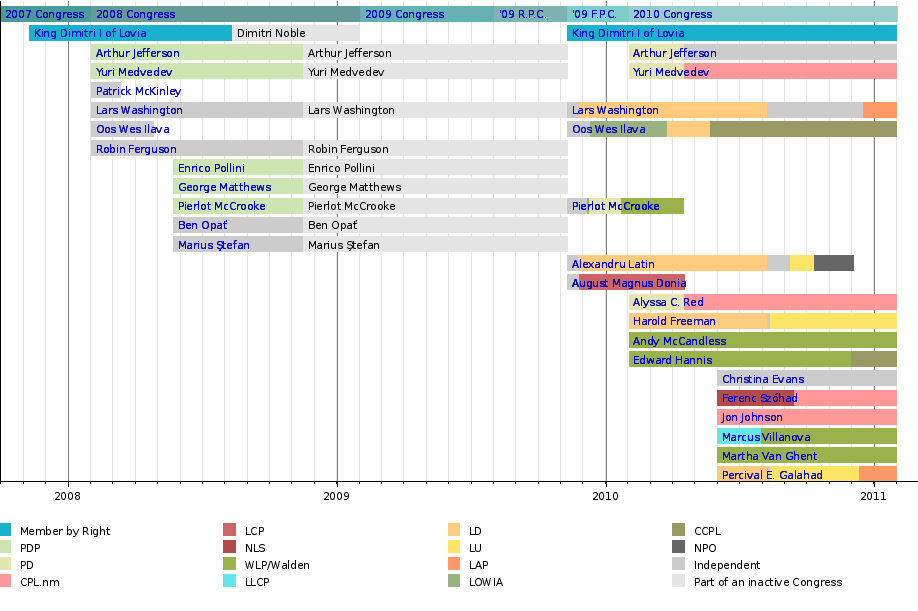 Retrieved from "https://nation.fandom.com/wiki/Congress?oldid=198752"
Community content is available under CC-BY-SA unless otherwise noted.