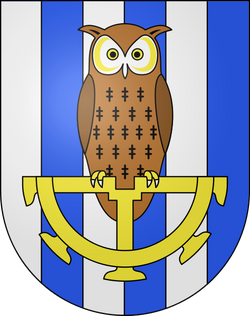 Culture (from the Latin cultura stemming from colere, meaning to cultivate) refers to patterns of human activity and the symbolic structures that give such activities significance and importance. Culture is manifested in music, literature, painting and sculpture, theater and film and other things.

Culture can be defined as all the behaviors, ways of life, arts, beliefs and institutions of a population that are passed down from generation to generation. Culture has been called the way of life for an entire society. As such, it includes codes of manners, dress, language, religion, rituals, norms of behavior such as law and morality, and systems of belief as well as the arts and gastronomy.

The Department of Culture, Heritage and Education provides technical and financial assistance to the National Monument Service.

The National Monument Service (abbreviated NMS) is a Lovian federal governmental institution under the Department of Culture, Heritage and Education. It is founded under the National Parks and Monuments Act in the Federal Law. The Service manages all National Monuments in Lovia. The governance of the organisation falls directly under the Secretary of Culture, Heritage and Education. The service manages all National Parks in Lovia.

The Capitol Museum Group is a Lovian organization that wants to unite the museums within Lovia and assist them. The group enhances the cooperation between musea and improves exhibitions by tigthening connections with museums worldwide. The museum group was founded on the 13th of April, 2008 by Yuri Medvedev. The first member was the Lovian Museum for Modern Art that started two new exhibitions in cooperation with the Capitol Museumgroup. The organization is managed and directed by the Department of Culture, Heritage and Education.

On August 23, 2008, the Department of Culture, Heritage and Education filed a report to the National Monument Service. The report contained the Royal Palace Project, that is about the future use of two protected buildings, the Old Royal Palace and the Great Royal Palace. The Old Palace would become a museum for the history of Lovian Royalty. For the moment there is not yet a specific plan for the Great Palace, though certain possibilities have been suggested. The Royal Palace Project consists out of four statements:

The Department may be reached at:

Retrieved from "https://nation.fandom.com/wiki/Department_of_Culture,_Heritage_and_Education?oldid=156094"
Community content is available under CC-BY-SA unless otherwise noted.