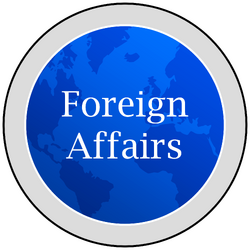 The Department of Foreign Affairs was a federal Lovian department concerned with foreign relations, foreign policy, diplomacy, and international representation. Former secretaries were Oos Wes Ilava, Ben Opať, Lars Washington and Yuri Medvedev. In 2012, the department was replaced by the Ministry of Foreign Affairs.

The Department of FA's purpose was to monitor the foreign relations of Lovia and advise Congress on important legislation concerning the international position of Lovia. 'Foreign relations' comprises several fields of action amongst which diplomatic recognition, conflict resolution and international trade are the most important. Lovia has remained isolationist for the bigger part of its history, only establishing big trade treaties after the Second World War and never directly interfere with another nation's policy.

Most Lovians like to think global and consider themselves to be 'citizens of the world'. These views are an inherent part of the Lovian society which is a mixture of various cultural backgrounds. This attitude goes so far that Lovian diplomats often consider themselves to be more close to the host nation then to Lovia itself. A general oversight of Lovia's relation with other countries can be found here.

The incumbent Secretary of FA was working on a bill that will introduce a standardized mechanism for diplomatic recognition. (see COMMISSION)

Embassies of the wikinations Edit

All nations recognized by the Lovian government are entitled to an embassy on Lovian soil. This embassy is considered to fall within the jurisdiction of the occupying country and functions as first contact between that nation and Lovia. An ambassador is appointed in consultation with the national government and has the right to perform diplomatic acts. A list of all embassies of wikinations in Lovia:

The Department of FA is still looking for a Libertan ambassador. Also, Lovia does not yet have any embassies of its own. Currently the national ambassadors function as first contact between Lovia and other nations. The Secretary of FA is considered a 'high ambassador' who may perform diplomatic acts under the approval of Congress.

The incumbent Secretary of FA was working on a bill to formalize the diplomatic institutions that concern dealing with foreign affairs. (see COMMISSION)

On request of the 2011 Provisional Congress the Department of Foreign Affairs made a budget plan outlining the estimated expenses for 2011. The budget plan includes operational costs, development programs, contributions to international research institutions and a budget for foreign trade jointly operated with the Department of Industry, Agriculture and Trade. The total estimated resources needed comes down to 47 million LD. The Budget Plan 2011 still needs to be approved by the Congress. Secretary Medvedev is expecting severe criticism and thus extensively motivated his budget allocations. The entire budget plan is available for review at the commission.

Retrieved from "https://nation.fandom.com/wiki/Department_of_Foreign_Affairs?oldid=156097"
Community content is available under CC-BY-SA unless otherwise noted.