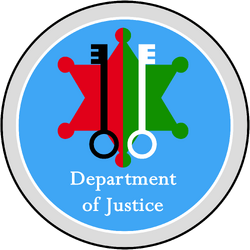 The Department of Justice was a Lovian federal department. It was occupied with federal justice (Supreme Court) and had oversight control over all courts. It was officially founded on Inauguration Day 2008, but didn't start until March 20. The Secretary in the Medvedev II Government was Alyssa C. Red, appointed by Prime Minister Yuri Medvedev and HRH King Dimitri I. In 2012, the department was replaced by the Ministry of Justice.

Information on the Department Edit

The first Secretary of Justice was Arthur Jefferson

. He did not have much experience in justice matters, but was willing to offer all of his time to learn the basics and the details of the Constitution, the Federal Law and all the issues concerning justice. After the Federal Elections of 2010 he was followed by Alyssa C. Red, who promoted the old secretary to Supreme Court Judge.

See also: Judge for more information on judges and the appointment of Supreme Court Judges.

The first Supreme Court Judge is appointed on April 16 by the Federal Secretary. He chose for Yuri Medvedev for the following reasons:

As Yuri Medvedev already confirmed his appointment in a private atmosphere, he is now officially appointed.

Because the Lovian government wants to avoid accumulation of power by individuals, Yuri Medvedev was removed from the position of Supreme Court judge in mutual consensus. He proposed to give his post to Arthur Jefferson, who formerly headed this department and thus had good knowledge of the Constitution and law enforcement in general. He will be appointed when he officially agrees. The Department of Justice still seeks to appoint a second Supreme Court judge, but in recent cases has been proven to be ineffective and is wanted to be replaced.

Retrieved from "https://nation.fandom.com/wiki/Department_of_Justice?oldid=156099"
Community content is available under CC-BY-SA unless otherwise noted.