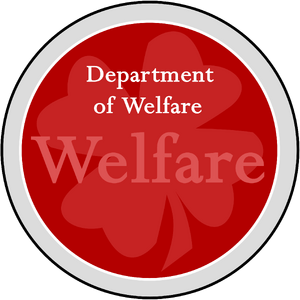 The Department of Welfare, also known as Welfare Department and DoW, was the Lovian federal department charged with health care, prevention programs, social services, public safety, police, etc. It was founded in February 2008 by the Medvedev I Government. The last Welfare Secretary was Judy Almore, of the SDP. In 2012, the department was jointly replaced by the Ministry of Health, Ministry of Labour, Ministry of Justice, and Ministry of Defense.

The first Secretary of Welfare since the 2007 Constitution was Arthur Jefferson, member of the ruling Progressive Center Party. He already served as Welfare Secretary in the Libertan government. After the 2008 Mid-term Elections, party colleague George Matthews was appointed to the Department.

After the Federal Elections, 2010, Edward Hannis (WLP) was appointed Secretary. Due to his inactivity, the office was given to Martha Van Ghent (WLP) after the mid-term reshuffle. After the Federal Elections, 2011, Oos Wes Ilava became Secretary of Welfare. Following the collapse of the 2011 Congress, the 2011 Provisional Congress was formed, and William Krosby was appointed Secretary of Welfare. In June 2011, Krosby was replaced with Judy Almore.

The department was based in Downtown, Noble City, at 11 Freedom Avenue.

A list of hospitals, medical centers and other care facilities, and what they are beig allotted yearly for upkeep by the federal government.

The Lovian police systems are enshrined in the Federal Law, Articles 5 and 6. There are two major Lovian polices:

Every Lovian state is obliged to erect a local police system and is free to choose which system to apply. Several options are available, as described in the Federal Law:

Retrieved from "https://nation.fandom.com/wiki/Department_of_Welfare?oldid=184641"
Community content is available under CC-BY-SA unless otherwise noted.