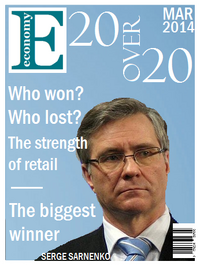 Economy's 20 over 20 is an annual report on the twenty wealthiest people in wikinations with over 20 million euros in value. Economy publishes a yearly magazine special listing these multimillionnaires and giving reports and insight as to how they made their money and on their businesses.

The first Economy 20 over 20 magazine was published in 2003, though since 2007 the magazine has focused more on analyzing the wealth and businesses of those on the list. The magazine is released in March of each year.

The list for 2014 includes a majority of Brunanter and Lovians. Most of the top twenty made more money compared to last year, and less than a third lost significantly during that same period. Only three people inherited any part of their fortune, and all are made or are expanding their fortune via their businesses.

Retrieved from "https://nation.fandom.com/wiki/Economy%27s_20_over_20?oldid=175063"
Community content is available under CC-BY-SA unless otherwise noted.