Enrico Pollini (Naples, February 16, 1991) is a Italian-born former Lovian politician and businessman. He was elected to the 2008 Congress during the Mid-term Elections, 2008, in which he ended third out of five candidates. He was New Town's chairman for a while in 2008.

Pollini ceased all his political activities after August 2008. On August 14th, he had announced to be willing to take up his political duties more seriously, after which he left the political scene. He was re-appointed nominally to the 2009 Congress and the 2009 Republican Provisional Congress.

He is a Roman Catholic. 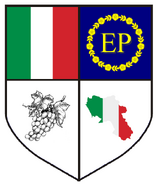 2008 mid-term election propaganda
Add a photo to this gallery

Retrieved from "https://nation.fandom.com/wiki/Enrico_Pollini?oldid=92588"
Community content is available under CC-BY-SA unless otherwise noted.