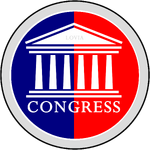 The Federal Elections of 2008 were Lovian federal elections that were held in January 2008. It was the first federal elections since the adoption of the Constitution of 2007 and they were largely organized by Dimitri. Seven Members of the Congress were elected and Yuri Medvedev became Prime Minister. He and the King formed the Medvedev I Government from the elected candidates. The team of Congressmen was enlargened in May in the 2008 Mid-term Elections.

These Lovian citizens ran for Member of the Congress. Note that the king didn't have to run for MOTC, as the Constitution forsaw an automatical membership.

Retrieved from "https://nation.fandom.com/wiki/Federal_Elections,_2008?oldid=184646"
Community content is available under CC-BY-SA unless otherwise noted.