The Jacobian branch of the royal family of Lovia consists of Prince James, the third child of King Arthur II, and his descendants. A few of the earliest members of the branch are considered to have been more outgoing than other members of the royal family, but current living members, now fairly removed from the monarch (King Sebastian I), tend to live relatively normal civilian lives.

Prince James of Lovia, or James Anthony Noble, (April 12, 1902 - July 26, 1957) was the third child of King Arthur II and his wife, Amelia Bernstein Hoover. He had two siblings, Queen Lucy I, and Prince Noah.

Unlike his siblings, James was the adventurous one of the family, and was often getting himself in trouble. In 1924, the prince married Catherine de Montbazon (1901-1973), a French cabaret dancer. Their marriage was slightly scandalous since she was two years older than him. They lived in Paris where he learned to fly, becoming one of the first Lovian aviators. They had three children, Caroline (1922-1996), George (1924-1999) and Natalie (1939-1959). With kids, both parents became less "crazy" and more normal. The death of his father in 1938 was a turning point in James's life; upon returning to Lovia he became very serious and saddened. He took comfort in taking care of his mother and began painting (some of which are in the Museum of Art and the Lovian Museum for Modern Art). The death of his mother hit him seriously and he became ill. By 1950, he rarely left his house at all. Having taking up smoking in 1938, he died from lung cancer in 1957.

Princess Catherine of Lovia, born Catherine de Montbazon, (1901-1973) was a French noblewoman and a Lovian princess after her marriage to Prince James. Catherine de Montbazon was born in Tours to Philippe de Montbazon (1856-1917), the son of Camille Philippe Joseph de Rohan, the Duke of Montbazon. Her mother was Louise Demichel, a French socialite. Catherine was quickly bored of her stuffy, upper-class life and had dreams of running of to do something. When she was 19, she ran away to Paris to join a cabaret dance troupe. She married Prince James, a younger man, in 1922. They later had a daughter the same year, Caroline, and two years later, George, and in 1939 Natalie. When James died in 1957, she lived alone until her death in 1973.

Princess Caroline of Lovia, or Caroline Catherine Noble, (1922-1996) was the eldest child of Prince James and Catherine de Montbazon. Princess Caroline, like her siblings, became known as a wild jet setter. She became a model and was involved in some racy photo shoots in the late 1950s. She was engaged to Fu'ad Echouafni, a Moroccan man in 1948, but he died in a plane crash over Italy in 1950. She later married Henry Chase. She and Henry had two kids, Louisa Chase (1962) and David Chase (1968). 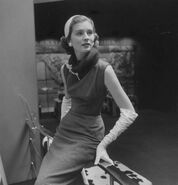 A photoshoot with Caroline done for an American magazine in 1959

Princess Caroline and Fu'ad Echouafni
Add a photo to this gallery

Prince Georges of Lovia, or George Arthur Noble, (1924-1999) was born to Prince James and Catherine de Montbazon in Paris. When his family moved to Lovia in 1942, he was the one who adapted the most, even anglicizing his name to George in 1955. He was married in 1960 to Maria Torretasso, a member of the Czech-Italian branch of the House of Thurn und Taxis. In 1971, they had their first and only child, Princess Helena of Lovia, while in 1973 they went through a miscarriage. George and Maria would often be seen in Italy, where they spent half the year (they had a country villa in Florence). He and Maria were divorced in 1971, only to remarry in 1972 (quite lavishly) at The Olympia. He and Maria remained quite close until his death in 1999; she would die herself in 2001.

The prince with his wife
Add a photo to this gallery

Princess Natalie of Lovia, or Natalie Louise Noble, (11 June 1939 - 4 April 1959) was a Lovian princess and amateur race car driver. Natalie died at the age of 20 in a car accident during a race.

Natalie was born to Prince James and Catherine de Montbazon in 1939. She was very much like her parents (in their early life) and was outgoing and did things that traditionally not considered "appropriate" for women. She was able to indulge in a pastime of race car driving, which she picked up when watching Juan Manuel Fangio and Maurice Trintignant at the 1954 German Grand Prix. She first took up amateur racing in 1956, learning to race on a four year old Lincoln Capri bought for $900.

She enjoyed driving classic vehicles, able to drive older Bugatti, Delahaye and Invicta cars, though she would only ever come to own a 1926 Bentley. In 1959, she participated in the inaugural Vickers Sprint Rally. In the Abby Highlands portion of the race, she slammed her car into the wall of a cliff and died of her wounds, having lost control during a dangerous overtake by another driver. There is a plaque at the spot commemorating her. Her Bentley was acquired by the Lovian Auto Museum in 2002 and restored.

Natalie became engaged to Italian auto mechanic Vincenzo Moretti (1920-1977) in 1958, but she died before they married. Moretti was her mechanic from 1955.

Henry Chase (1918-1980) was a Lovian businessman. He was born in 1918 into the Chase family, of Scottish origin, who amassed a large fortune in shipping. He was born to Alfred Chase Sommers and his Swiss wife Marceline Durosier, who came from a wealthy banking family. In 1958, he met Princess Caroline of Lovia in Noble City. They were married in 1962, apparently to "legitimize" the birth of their daughter Louisa Chase. In 1968, they also had a son, David Chase. Henry and Caroline took to holidaying in Monaco, where they owned a small flat. Henry died in 1980 after a prolonged sickness.

Maria was born to Prince Massimo della Torre e Tasso (1890-1955) and his wife, Princess Martina Louisa of Brunant (1891-1981). She was baptized in Italy and her godparents were her grandparents, King Pieter II and Sophie of Mecklenburg-Schwerin, the ruling monarchs of Brunant. Her birth came as a relief to her parents, as the couple had been trying for years, Martina was getting old and they were drifting apart.

They moved to Florence in 1938 and her father was involved with the Italian Army during that period as an officer in the artillery before being captured at Lentini during the Allied invasion of Sicily in 1943. Following the war, Maria and her mother immigrated to Lovia, unable to obtain visas for the United States.

Martina Louisa refused to remarry, but she helped arrange for Maria to meet Prince George of Lovia in 1951. Initially she refused his advances but after nine years, she agreed to marry him. The couple had their first child, Helena in 1969, but they abruptly announced a divorce in 1971. Despite this, they remained close and in 1972, they remarried again in what was one of the social events of the year, being quite a lavish wedding.

Maria was pregnant again in 1973, but that ended in a miscarriage. She and George moved to Sofasi in 1985, where they grew a large vegetable garden and sold cucumbers and tomatoes at the weekend market until the late 1990s, where she was too old to do the work. George died in 1999, after which she became ill and died in 2001.

She was survived by her daughter and two grandchildren, Josephine and Albert.

Prince David was born to Princess Caroline and Prince Henry (Henry Chase) in 1968 in Noble City. David began to disassociate himself from the Royal family and the extravagant life lived by his sisters. In 1986 he resigned from the line of succession and left the Royal Palace. His first move was to go to Canada, doing various jobs under the name David Noble. He moved to the USA in 1988 and studied geology at UCLA. He started teaching Earth Science at a high school in a village outside of Los Angeles, while maintaining his education, and in 2002 he moved back to Lovia, living in a modest townhouse in Noble City. He is currently a starting professor at Blackburn University.

Princess Helena of Lovia (born 7 June 1969) is a Lovian princess. She is the daughter of Prince George of Lovia and Maria della Torre e Tasso, an Italian-Brunanter.

Princess Helena of Lovia was born in 1969 to Prince George of Lovia and Princess Maria. She was their only child.

Young Helena grew to become very beautiful, attracting the attention of many suitors. She dated tennis player Greg Veldt from 1987, in what many people thought would result in marriage, but they broke it off amicably. She was later involved with Russian businessman Andriy E. Shishkin and then her drivers, first Harry Nelson and then Vlad Muserski.

Eventually, in early 1989 she began dating Anthony Mortensen, an economist by trade who was writing a novel on a fictional royal household and was looking for some insight into how they actually worked. Mortensen proposed to Helena in April 1990, whereupon she accepted. They were married in September in a simple ceremony at the Protestant Trinitas Chapel.

Helena has famously never been able to pass the Lovian driving exam, reportedly failing six times. In her free time she is hoping to work on a book detailing the history of Lovian television, but unsure of when it will be completed.

After having children, Helena studied office management at the now New College from 1997 to 2000. She then worked in the offices of the now-defunct Sanders insurance as a secretary. She moved to take up the same position at Kaboom TV, albeit with more responsibilities. In 2009 she was enticed to work for ZAM TV, and took up a position in human resources, being promoted to head of that department in 2012.

Mortensen was born in Noble City to Princess Helena of Lovia and Anthony Mortensen. Her mother worked as a secretary and then in human resources while her father, an economist, worked as a writer and later as a professor at Blackburn University.

Mortensen studied at Painters Hill Elementary and then at King Arthur I College, where she became known for opposing, among other things, "uniforms and other elite aspects". She then studied education at Blackburn University, Noble City. She worked as a teacher's assistant at Grade 1 at Painters Hill before becoming the Grade 2 teacher at R. Pennington Primary School in 2015. She was one of the bridesmaids at the Wedding of Princess Helene of Brunant and Bernd Donia, being a distant cousin of the bride.

Mortensen is presently dating the librarian at her school, Robbie Nelson.

Retrieved from "https://nation.fandom.com/wiki/Jacobian_branch_of_the_royal_family?oldid=199750"
Community content is available under CC-BY-SA unless otherwise noted.