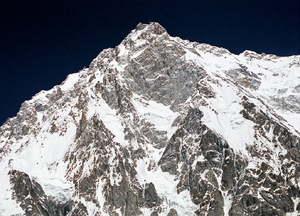 Kings Peak, at 946 meters, is the tallest mountain in Kings and in Lovia. It is in the Abby Highlands. Though it is not as high as other mountains around the world, it is arid, snowy and very dangerous. It is a monumental challenge to be able to climb and descend the mountain, which had been known for many years as the "unclimbable mountain". Thus, all expeditions to the mountain have been highly publicized. The mountain is known as being "beautiful but deadly", as many have died on its slopes.

Kings' Peak was created some 5 million years ago during the formation of the island of Kings.

Founding Father Andrew Johnson became the discoverer of Kings' Peak when in 1876, he sighted the mountain on one of his exploration trips. He documented it in his journals, and collected and documented it's flora and fauna.

In 1877, Andrew Johnson attempted a climb. Many called him crazy and believed he could not do it. But, he persisted and was able to prepare for it. He was climbing the west face alone and broke his arm, so he was unable to continue. He returned with no success. But he went down in history as the discoverer and first climber of Kings' Peak, in fact the 1st person to climb a Lovian mountain.

Andrew Johnson was a very determined man, and with a Swiss friend, Karl Neumann, decided to climb once again. They tried to do this on the east face. This expedition proved to be fatal, as his harness broke and led him and Neumann to early deaths. After this, it would be many years before anyone would dare climb this peak, especially the "unclimbable" East Face.

In 1901, A challenge was established by Sir George Coningham, where he would give $5,000 to the first person to climb and descend Kings Peak. A team led by Maxence Lebrun, and a team led by Francis Euston took up the challenge. Lebrun's team made it to 200 meters, but Maxence became sick and they had to turn back. Francis Euston made it up 250 meters, but he fell into a crevasse, and later died there. No one won the challenge that time.

In 1907, James Macray led an expedition to Kings Peak, to win the $5000 prize. He was practically broke, so he needed money badly. When his expedition crew found out he had no money to pay them, they quit. Demoralized, Macray also turned back. 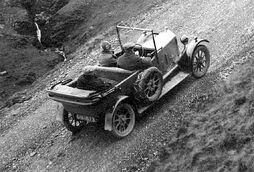 In 1913, Willian S. Everett led a major expedition to Kings Peak. He had contacted the press and the radio, to capure his amazing feat. He was really honfident he would reach the top. Everett had purchased 2 fine Arabian horses and a Rolls-Royce Silver Ghost, for use in the climb. Though the Silver Ghost had been tested in Europe for HILL climbing, Everett was sure it could climb Kings Peak. The car broke down in 20 minutes; it had been pushed too much. He then used the horses; they weren't used to the cold and eventually died of it. So, Everett's major failure appeared in the front page of Lovian newspapers. 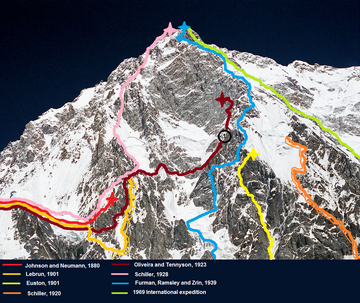 Bernd Schiller, a Swiss mountain climber went to Lovia in 1920 and began his ascent of Kings Peak with two other partners. He was used to climbing the alps, so he underestimated the real force of the mountain. Halfway up, he broke his leg and had to turn back. His partners gave up with him.

Louis-Joseph Varne, a French naturalist, came to Lovia in 1922 in order to study the conditions of Kings Peak. He made the climb, but spent many nights there. He ws found dead in the mountain, which doctors said the cause was that he got sick.

Michel Oliviera and Oliver Tennison, who had previously (in 1922) climbed Mount Smith made an attempt to conquer the "unclimbable" peak. Like several before them, they made the attempt by going from Kings' Second through to "her deadliness" and making a huge traverse through the middle expanse (similar to Anderson and Veit's traverse). But, they made the mistake of going along Hell's gate, a razor-sharp ridge. To avoid much of it, they decided to cross a large, flat face instead. Here, their ropes failed to hook on and the two climbers fell down to icy deaths.

In 1925, J. Mallory Montgomery attempted to do what William S. Everett tried to do, climb Kings Peak in a car. He purchased a British Army truck to use on the climb. Though he made it to 300 meters up (far more then Everett achieved), the car could not go any further.

This time, Bernd Schiller was well equipped and well aware. His second expedition began on 3 June, 1928. He made the ascent quickly, and made it to the top, after which he placed a Swiss and Lovian flag on the summit. But, astorm led him to camp out near the peak, and that proved fatal.

It would be a while before anyone attempted an ascent to Kings Peak.

On October 16, 1939, Henrik Furman, Albert Arthur Ramsley and Marco Zrin (all Lovian) achieved what many before them failed to do. They managed an ascent AND descent of Kings' Peak (West Face), and were rewarded with Coningham's $5000 prize, presented by Silvia Coningham (Sir George's daughter and A.A. Ramsley's mother).

A Visitors Center is located at the mountain's base, on the west side. Here, people can learn about the local geology of the Abby Highlands, and the history of the many expeditions. There is a restaurant and a small gift shop. From here, there is a cable car that can take you up 280 meters on the mountain to see a camp made in the 1920s by Bernd Schiller.

Retrieved from "https://nation.fandom.com/wiki/Kings%27_Peak?oldid=174786"
Community content is available under CC-BY-SA unless otherwise noted.