Little Europe is a neighborhood in Lovia's capital Noble City. It's known for its large number of restaurants, embassies, parks and it's peach colored beach. Many Lovians from the countryside and foreign tourists come to Little Europe during the summer to celebrate their holidays.

Little Europe was named this way because of the diversity of ethnic European groups that came to inhabit this new neighborhood, in the 50s of the previous century. The majority of this part of Noble City has always had European roots. However, their national identity has gone a long time ago due to the "Lovian melting pot".

A number of inhabitants of Little Europe also come from Brunant

The Little Europe seal is colored white and bordered by the French tricolor: blue, red, and white. A large light greyish blue fleur-de-lys is depicted in the center, underneath the names of the neighborhood and city. Most of the symbols refer to France and Europe in general, like the flag of Little Europe on which three white fleurs-de-lys with a red border are depicted, which is a French symbol. The field is colored navy blue.

Around 1900, the first people came to inhabit this part of Sylvania. Most of them were from British and German ancestry and had come over from California. They lived in farms, almost attached to the city's border. Back then, Noble City consisted only of the current neighborhoods Downtown, Old Harbor, Bayside and the Trading Quarter. This area had a similar look like Long Road nowadays.

Nevertheless, after a famine in the rural parts of Lovia in 1955, many people came to Noble City to escape from the difficult situation on the countryside. Noble City was obliged to expand to the north, where they were planning a new neighborhood. However this new neighborhood should have contained many houses for those from the countryside, as fast as possible, the Mayor of Noble City decided to stop the construction for a while to adapt the plans and to create green zones. He thought it would be the best to keep the green character of this area, especially when the local farms had to be demolished. But the construction of this neighborhood delayed and many Lovians had already found a home in other places, like Little Frisco and Mandarin Village. Even in 1965, the project wasn't finished yet. And it didn't even have a name. The interests for a new neighborhood were almost gone when the neighborhood was finally finished, in 1967.

In the end of 60s of the previous century, many Europeans emigrated to Lovia and arrived at Noble City. As all of them needed a home to live in, most of them went to this new part of the city where at the moment many empty houses were standing. Because of the new European influences, this neighborhood got the name Little Europe. An important part of the immigrants came from Western Europe. Thanks to these arrived Italians, Germans, French and Spanish people, Little Europe developed in a totally different way then in the rest of Lovia's capital.

Later on, in the 70s and especially in the 80s and 90s, Little Europe would have become a melting pot. The Italian or French identity for example had become a mixed European and Lovian identity. No German or Spanish could be heard anymore on the streets, because they would have made room for (Lovian) English.

In the new millennium, Little Europe has become a new challenge for cooperation's projects. Many old, small and sometimes rotten wooden buildings were getting demolished and modern buildings would later on take in their place, like the Press Center.

There is a high diverisity of etnicities and mixed etnicities. Most of them are originally from Europe. Little Europe has communities of Germans, Dutch people, Belgians, Romanians, English people, French people, Italians, Spanish people and Western Slavic people.

Bellevue Apartments from the inside 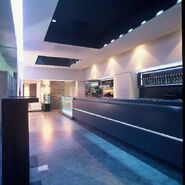 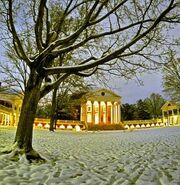 Thomas Jefferson Park in the winter

Wall of the Thomas Jefferson Park

Farm in the Abraham Lincoln Park

The Orthodox Saint John Church in the evening, Trinitas Chapels

The interior paintings of the Orthodox Church, Trinitas Chapels
Add a photo to this gallery

Retrieved from "https://nation.fandom.com/wiki/Little_Europe?oldid=191117"
Community content is available under CC-BY-SA unless otherwise noted.