Marc E. Thomassen was born on September 11 1964 in Clave Rock, Sylvania. He used to be the spokesman of the Iron Guard Party's moderate wing, and now leads the radical Union of National Solidarists. He studied law at the Blackburn University, where he met Valery Adrian, who he married in 1988. He currently lives in Train Village but often resides at his apartment in Downtown, Noble City.

He led the UNS to a high point of success in 2011, but UNS lost all credibility after the Lovian Civil War, in which the extremist wing was heavily involved. The few remaining members decided to disband. After several years of painstakingly building a new support base around his hometown of Train Village, he ran in the 2015 elections on a UNS platform and was elected as the party's only MOTC.

Thomassen was born in 1964, the son of Edward and Karin Thomasson. Edward was of American-Lovian origin, and worked as a miner, while Karin, a Dutch-Lovian, was a housewife. Marc grew up in Clave Rock without his father who died in a tragic accident during a mining operation when his son was three years old. The family lived in poverty, dependent on welfare and earnings from casual manual labour on Sylvanian farms. At the age of 12, financial difficulties forced his mother to send Thomassen to his uncle who lived in Noble City. She had no means to pay for her son's education but didn't want his talent to be wasted. As it turned out, Thomassen was very good at English and history. He wanted to go into politics, but under pressure of his uncle decided on an education at law school. He went to the Blackburn University and was involved in a number of student movements for a while. He also met his wife, Valery Adrian. They both graduated in 1987 and got married the next year. They moved to Train Village where they live up till now.

Thomassen and Adrian have two children, Sophie and Juliette, who both run school at the King Arthur I College. Thomassen enjoys hiking trips in the Emerald Highlands and is known to be a big fan of the Dire Straits. During the holidays he mostly takes his family skiing in the United States.

After his studies he joined the Iron Guard Party as legal advisor to the party. He soon climbed up the ranks but because of differences with the party leadership he was forced out to the outer circles. Thomassen advocated for a more democratic and popular strategy and gained support after the scandal following the trial against the IGP. He and other members dissatisfied with the course of events created a pressure group inside the IGP, called the Union for New Solidarity (UNS). Hoping that this would be sufficient to make the leadership see its mistakes, Thomassen declared the following:

They behave as if they are the center of all creation, always glorifying themselves. With their heads that far up each other's asses, how could they be capable of defending the true needs of the people? You may label them 'fascist' or 'nationalist' but to me they look just like a bunch of underaged college anarchists: disorganized and unaware of reality.

Hoping that the program of 'new solidarity' could turn the IGP away from its fascist affiliations and gain support from more moderate voters, Thomassen wanted to run for chairman in the next elections. He never got the chance, as the IGP was shut down by court order in May. With the old party defunct and its elite behind bars, Thomassen started holding discussions with old allies and a few others not previously involved in politics. He officially announced plans for a new party in September 2010. The Union of National Solidarists was founded in December 2010, and is currently led by him. Thomassen did not stand in the 2011 elections, however, instead calling on voters to spoil their ballot. Observers suspected he would do the same in the special elections later that year, but he confounded expectations by running and then being elected alongside five other members of the UNS.

Thomassen's political career reached a nadir during the Lovian Civil War. Old IGP troublemakers, led by I.G. La Blaca, helped lead the rebel side. While sympathizing with the aim of replacing the government, Thomassen condemned the fomenting of ethnic divisions within Lovia's population. Eventually, he announced the expulsion of I.G. La Blaca and several other members from the party. Soon afterwards he was beaten up by men wearing masks and even briefly kidnapped from his home in Train Village. In a video message, he restored membership to all those previously expelled. After his release, he fled with his wife and mother to the United States until the end of the war.

Since Thomassen refounded the UNS in 2015, he has created several safeguards to prevent extremists from joining the party. He was re-elected to congress in the 2015 elections. 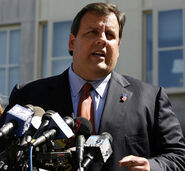 Add a photo to this gallery

Retrieved from "https://nation.fandom.com/wiki/Marc_Thomassen?oldid=183349"
Community content is available under CC-BY-SA unless otherwise noted.