Wetland provide a safe and lush environment for many different species of fish, birds, and insects. It includes the mallard duck, the Sickleback fish, mangroves, and water moccasins.

Notable animals with their habitat in the Mellon Wetlands:

Like animals, their are number of plant communites that will only survive in the unique environmental conditions of a wetland. In the Lovian wetlands account for only 4 to 8 percent of the total land area but over 25 percent of the nation's vascular flora occur in wetlands.

Mangroves establish themselves in the shallower water upslope from the mudflats. Mangroves further stabilize sediment and over time increase the soil level. This results in less tidal movement and the development of salt marshes. (succession) The salty nature of the soil means it can only be tolerated by special types of grasses e.g. saltbush, rush and sedge. There is also changing species diversity in each succession. 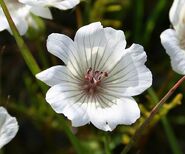 Sebastopol Meadowfoam
Add a photo to this gallery

Retrieved from "https://nation.fandom.com/wiki/Mellon_Wetlands_National_Park?oldid=177181"
Community content is available under CC-BY-SA unless otherwise noted.