The Nobel University was a Lovian private university, originally founded in 1887 and named after the original family name of the Lovian monarchs. The greatest part burned down in 1971, causing the university to close for 36 years. In 2007 the university reopened under the management of Rector Yuri Medvedev. The school motto was nec plus ultra ("nothing than the best") and could also be found on the school emblem.

In 2008 a giant reform was made, re-organizing the university and the entire Lovian educational landscape. The university was renamed Blackburn University after the scientist Elisabeth Blackburn and became a part of the newly erected Noble Educational Corporation, that also founded two new colleges, King Arthur I College and King Arthur II College. The Blackburn University (having both a campus in Noble City and Newhaven) is the actual successor of the Nobel University.

The color of the Nobel University was 'navy', just like the seal and flag of Noble City, where the main building of the university was located. The seal is based on the old design, and of course it is dominated by the color navy. Fot the flag however, was chosen for a new, more modern composition. To achieve this, four stars were added to the flag and the other items (crown and text) were relocated. 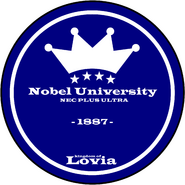 Another flag design
Add a photo to this gallery

Retrieved from "https://nation.fandom.com/wiki/Nobel_University?oldid=174545"
Community content is available under CC-BY-SA unless otherwise noted.