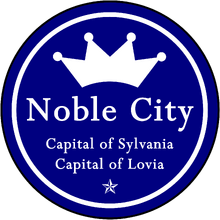 The last Noble City Mayor was the then King Dimitri I of Lovia, who held this office since the death of the former King, King Arthur III. King Dimitri reformed Noble City in many ways, by building new neighborhoods, renovating and extending the transportation network and putting the city on the international map by making it a center of arts, politics and social life.

As mayor is a free function, no determined terms or elections are held for the government of Noble City. Everyone can become mayor unless the people do not support the candidate and will propose another one. This is the full list of Noble City mayors, as registered by the Noble City Government:

Retrieved from "https://nation.fandom.com/wiki/Noble_City_Government?oldid=165727"
Community content is available under CC-BY-SA unless otherwise noted.