Pinas Automobile is a Lovian automobile manufacturer headquartered in Newhaven, which has been almost completely owned by it's founder until 2001. The company evolved from Lovian Car Union (LCU) and New Automobile Company. Pinas' corporate tagline is "the people movers". This English tagline is also used in the few other countries that Pinas operates within. Pinas is a frequently seen car in Lovia, alongside Vanguards. Pinas also participates in the Lovian Motor Show.

Pinas was founded in 1990 by W.J. Pierce, a Lovian-American industrialist. In 1997, Yuri Medvedev acquired a 35% stake in the company. In 2001, the aging Mr Pierce (by then 72) sold his remaining interests to Medvedev. He expanded the company to newer markets. In 2011, Pinas was bought by Vanguard Group, and is now concentrating on the American/Pacific markets, as well as Lovia. Its new counterpart, Vanguard, will also be sold in Lovia but also in Europe. Pinas will be presenting some models at the at the Koningstad Automobile Salon alongside Vanguard.

Pinas was one of the teams in the unsuccessful Lovia Racers Cup. For 2015 they are entering two 1.6 liter Pacifica cars in the WCUP Championship, with Hans Anderson and Carl Hladinký as drivers. 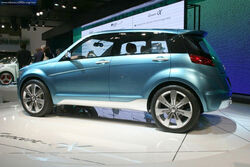 The Pinas Pacifica is a small family car. It fills a niche above the small Viteria hatch. Available in Lovia and No. America this year, and the Pacific in December, it will be a practical car, compromising between size and capacity.

The Pinas Rover is a midsize family car sold by Pinas Automobile in various markets throughout the world. Slotted under the larger Vanguard Virginia, it comes in standard form and in "S" version, which comes with a 220HP V6 engine based on the Atlantis America 350's.

The Pinas Rancer is a small family cross car. It will be built in both a standard version and an "S"-sporty version. All versions will be available in all of Pinas' markets except the L, which is not marked for Asia.

Retrieved from "https://nation.fandom.com/wiki/Pinas_Automobile?oldid=192271"
Community content is available under CC-BY-SA unless otherwise noted.