Rockafellow is a Lovian radio channel broadcasting various genres of rock music, in a manner that attracts teenagers, young adults and up-to-date music lovers. It was founded as a Founders Inc company on December 25, 2009. Rockafellow aired for the first time December 26th, 2009, at 6 PM. 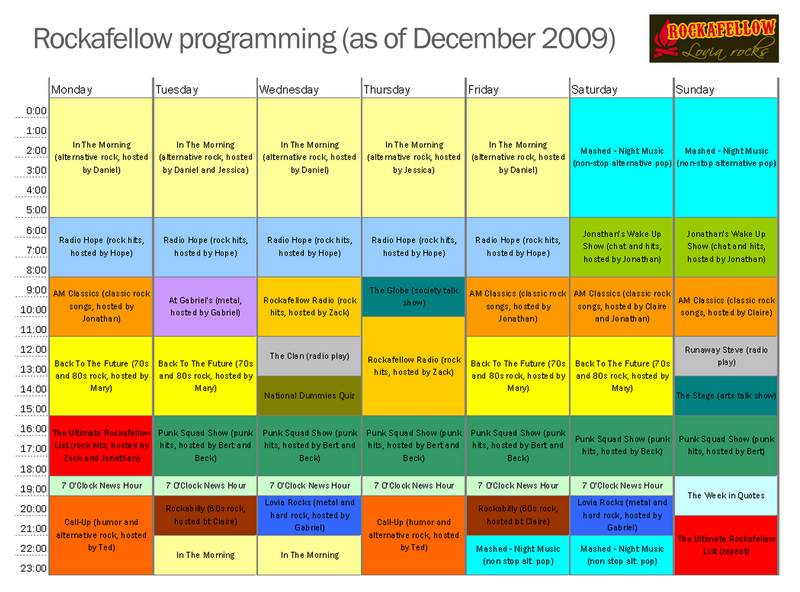 AM Classics is a three-hour radio program broadcast from 9 tot 12 AM on Mondays, Fridays, Saturday and Sundays. It's hosted by Jonathan Nelson on Monday and Friday, by Claire Van Hoeck on Sunday and by both on Saturday. AM Classics is all about mainstream rock classics, mostly from the 1970s to 1990s.

Back To The Future Edit

Back To The Future is a popular Rockafellow broadcast featuring good ol' 70s and 80s rock. In a way, it resembles AM Classics, with the difference that Back To The Future isn't limited to classic hits. The program is hosted by Mary Nobles and four sessions are broadcast on four days: Monday, Tuesday, Friday and Saturday.

Call-Up is once described as follows:

Lovia's most trashy, intimidating and nonsensical program ever!
I love it.
--Anonymous

The program's concept consists of calling up famous people, politicians and celebrities, and trying to make them say ridiculous or embarrassing things. Though Ted Waterston never says anything provocative, he is well-trained in evoking such reactions.

The program airs on Mondays and Thursday from 8 PM to midnight.

In The Morning Edit

In The Morning is Rockafellow's week-time night show. It airs from midnight to 6 AM on Monday through Friday. The program is hosted by Daniel Donahue, who's often noted for his nonsensical humorous outbursts and sometimes lyrical descriptions of songs. The music is very alternative, often of American, British and West-European indie rock singers. Occasionally, more dance/techno-like songs are played, especially around 1 or 2 PM.

The Punk Squad Show is a very popular music program from Tuesday to Sunday. Hosted by Bert and Beck, the program starts at 4 PM and lasts until 7 o'clock.

As the name suggests, the Punk Squad Show essentially plays punk music. It offers mainstream forms of punk music, as well as alternative and trashy music. The show hosts have adapted the same style and are often humorous and edgy, criticizing society, politics and mainstream music.

Hope Flanders gave her name to this program, which she hosts. Radio Hope is all about making the listeners' morning more agreeable. The program targets at the awakening Lovians. Feel good rock numbers, funky pop songs and lots of hits are combined with gentle and humorous interludes and news notices.

Retrieved from "https://nation.fandom.com/wiki/Rockafellow?oldid=131385"
Community content is available under CC-BY-SA unless otherwise noted.