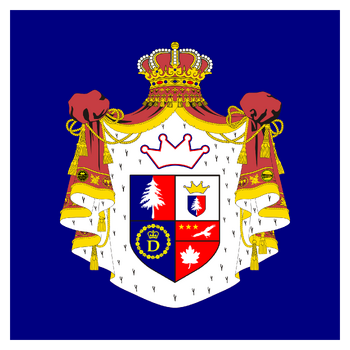 The field of the flag is navy blue, one of the official colors of Lovia[1] and the official color of Noble City. The royal family has always used this color as their mark color. The bagde depicts an extensive coat of arms, mantled by a bordeaux red ambrequin. On the left and right sides of the mantling, the simplified seals of Noble City (sinister) and Sylvania (dexter) can be noticed. The helmet is a royal crown with diamonds and pearls. As the royal family is openly Atheist[2], no Latin crucifices are depicted on the crown or on any other object of the arms. In front on the mantling, a simplified crown is shown. This version of the crown is used on the flag and seal of Noble City and King's Gardens. This crown is surrounded by a navy blue and red border, yet again the official Lovian colors.

The blazon has a simple form and is equally partied per cross, though the canton in the lower right is divided in two parts to, together making five. The first canton depicts the Pine Jack. The upper right canton depicts the Lovian flag once more on a blazon, in fact the Coat of Arms of Lovia, with a simplified golden crown on top, representing the role as Head of State. The lower left corner is charged with the Royal Cypher, a flower wreath with his initial 'D' and a crown. The last canton is divided in two subcantons, the upper part referring to Libertas, in which nation Dimitri has relatives and with which nation he has good relationships. The lower part, depicting a maple leaf, refers to the Neyt Family, a branch of a larger family containing the Nobles too.

The reactions on the Royal Standard design were highly positive. Congressman Lars Washingtonsaid:

Retrieved from "https://nation.fandom.com/wiki/Royal_Standard?oldid=165713"
Community content is available under CC-BY-SA unless otherwise noted.