In the meantime, Mr. 12trees opened a sandwichbar on the first floor of the Grand Eastern Mall, in front of Pierlot Pizza.

Quote from an enthusiastic visitor, the first customer Edit

The Sandwichbar is touring around Mandarin Village between 11:30am and 2:00pm and makes stops of roughly 15 minutes on different busy locations. At The Mall, he makes a stop for half an hour. Starting at the Patisserie, the driver turns left onto Princess Avenue, turns right at the end and turns around the block to make a first halt at the Ludwig Krämer Hotel. The last halt is at 1:45pm on Eppinck Square.

At your service also in Edit

Hungry mandarins (as Mr. Twelvetrees calls his fellow citizens respectfully), can order their favorite sandwiches a day in advance but the driving foodbar is always stocked with a wide range of various sandwiches in all sizes. 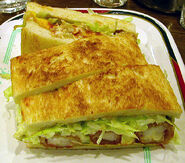 Spanish Sandwich
Add a photo to this gallery

The food is good and the price is low. For a quick bite, it certainly is a good place.

Retrieved from "https://nation.fandom.com/wiki/Sandwichbar?oldid=119864"
Community content is available under CC-BY-SA unless otherwise noted.