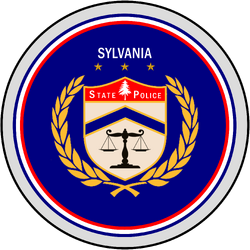 The Sylvania Police was headed by a Police Chief. In 2008, the Governor appointed Allison Sweet to the office. She served until August 2010, when the bureau was abolished.

The Sylvania Police was a state police institution. It took care of all cases crossing town or city borders. The Sylvania Police could assist Town or City Police when needed or could assist the Federal Police when that would have been necessary. Whenever issues transgressed state borders, the local safety authorities, including Sylvania Police, were obliged to hand over the case to the Federal Police. Cooperation whenever asked was required and withholding information on that case was strictly forbidden.[1]

All towns and cities in Sylvania had their own police authority. They operated within their town or city bounderies. If a case crossed these borders, the case was hand over to the state's police authority, the Sylvania Police[2]. The heads of these City or Town Police departments were called Bureau Chiefs.

Retrieved from "https://nation.fandom.com/wiki/Sylvania_Police?oldid=71146"
Community content is available under CC-BY-SA unless otherwise noted.