Truth Island is one of the islands of the Western Nation Archipelago, south of Asian Island, and the territory includes that and Mermaid Rock. The capital of the territory is Ferguson Beach Village, as well as being the largest settlement. It is part of the state of Clymene.

Truth Island was first discovered and explored in the early 20th century though its settlement was only undertaken from the 1950s onward. Truth Island's population was centered around Ferguson Beach Village and the fishing around that area, but with the creation of Adoha in the 2000s expanded to tourism and the service industry as well as green energy.

Truth Island has been was first explored in the early 20th century, around 1905 and 1908. In the 1930s a few Sofasians began logging operations in the island, but little development made it difficult for successful exploitation and further business was abandoned by 1938. During this period Truth Island became a haven for rum-runners, both to distribute Oceana beer in the north and as a distribution point for Mexican alcohol to the rest of Lovia. Rumrunner shacks were located in the south-east of the island and many of these resorted to paying off the Sofasi police for protection from the southern cartels and other mobsters. Clinton was also an important distribution point to Sofasi in the early 1930s, primarily for night-time operations due to its proximity to the Clymene coastline. A nearby brewery, Nat's was set up in 1934. Smugglers would slip across the narrow straight to Clymene, avoiding police patrols and cartel attempts to raid rival smugglers in the Sofasi bay. The end of prohibition saw all operations shut down in 1937, though Nat's was revived in 1953.

Truth Island remained uninhabited until the 1940s and during that period the first few people from Sofasi began temporarily settling the island's north coast. They primarily headed there to fish and explore the northern coast and the first semi-permanent residents lived in small wooden cabins. Dan Irving was among the first such people and widely considered to be the first advocate of separation from Clymene, but based around him as a king; no attention was paid to him though.

By the 1950s a number of people built summer homes, to enjoy the island's unspoilt natural beauty and pristine beaches. Soon, a number of well-known Lovians, Europeans and other foreigners began vacationing here, many of them celebrities and even Queen Lucy I of Lovia. The first few houses were built by the developers of the Lisney Hills community but by 1956 wealthier people began to bring in architects to build custom homes. They would form a small resort community named Truth Village, establishing what would be come a town with a unique architectural style, with only a few similar houses in the central plaza. Truth Village was renamed Symore Village in 1968 after first mayor W. J. Symore, who was elected to oversee necessary local services. During this period fishing featured primarily in the local economy, with many of them coming from Sofasi and southern Clymene during the famines and after. While forestry was again looked at to generate revenues, by the 1970s prominent citizens were more in favor of protecting most of the forests in the island.

Farming began in the 1950s and was enough to supply the local inhabitants, but weak harvests during the famines prevented major exploitation of this. Agricultural growth was negligible in following decades but enough to supply fruit and vegetables locally.

By the 1980s this village had grown in size and there was soon interest in setting up a local tourism industry to provide further financial independence, though lack of major funds at the time prevented much work.

In order to generate more tourism to the area, Adoha was planned in the 2000s as a resort community, with a number of hotels and venues. The COAST Fund was set up by several businesses who were the principal stakeholders in the project. An L$10 million project set about creating Adoha in order make it a major tourist hub in Lovia. Adoha was expanded and improved over the late 2000s in order to attract more tourism, with Governors Villanova and Abrahams bringing in casinos and clubs as well as furthering city services. Lovia's largest shopping center, Atrium Center opened in the late 2000s and became a symbol of the redevelopment.

The island is mostly forest but in the west side of the island is very mountainous called the Park Mountains, named after the Lovian hiker Ken Park, who did it in 1970. The summit of all the mountains is 102 meters which is taller than the Capitol building. There was consideration for total protection under NPS rule, which was proposed by former Clymene governor Marcus Villanova, though nothing came to fruition. In 2012 governor Justin Abrahams officially established the Truth Island State Forest to protect the nature and wildlife in the island.

To the southwest of the island Mermaid Rock is found, a small uninhabited islet occasionally visited by birds.

small river in forest east side of Truth Island 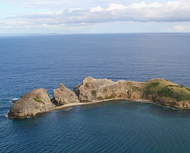 Mermaid Rock
Add a photo to this gallery

Tourism is the most important sector in the local economy. Eastern Truth Island is known for the resorts and many entertainment locations in Adoha and Ferguson Beach. The casinos, hotels, restaurants all generate a large amount or revenue.

There are small camping grounds and a small inn in Truth Island State Forest, and eco-tourism here is gaining ground. The Adoha-Ferg Beach area is also looking to inruduce a local currency, the Adoha Dollar, inspired by the Brezondian Lira and other local currencies.

Since 2008 there have been some investment into green energy generation. In 2012 PowerBuoys were installed in the waters off southern Truth Island in order to harness tidal power. There are proposals to expand this into a wave farm, and there is interest in creating an offshore wind farm to provide both energy to Truth Island and to Clymene. Several private energy firms, including Taiyō Alternate Energy, are looking to provide funding and expertise to help develop this sector and has worked to set up an algae farm. In 2014, Adoha is looking to formally establish a test wave farm along with other energy partners in order to provide energy to homes in the island some time in 2015.

TAE opened an offshore wind park in 2017 with the help of Libertan dredging and land reclamation company Faber. The farm consists of 16 turbines with a total capacity of 62 megawatt (MW). The government of Adoha has already contracted Faber to establish a wave farm in 2018.

Another sector of the local economy deals with agriculture and fishing. There are a number of small farms in the south of the island that grow a variety of vegetables and fruits. There is also a substantial fishing sector, though this is regulated to ensure overfishing does not occur.

The majority of people in Truth Island are of Lovian and/or European descent. Over 80% have Lovian ancestors, and of the remaining 20% most are European (British, French, Brunanter, Spanish) or Latin American.

Truth Island has a culture influenced by (northern) Lovian, European and western (Californian) American. Unlike most of Lovia, the area is nominally quite religious, with Catholicism and Protestant Christian a majority of the population.

The summer months are hosts to a volleyball festival and Beachfest, a 1960s themed beach carnival. On December 21st locals celebrate the winter solstice with a bonfire, though this has only been observed since the 1970s, brought over by European inhabitants.

Adoha Elementary and Birkeland Primary School are the primary schools in the territory. Ferguson Beach High School is the only secondary school and Adoha College serves as the only tertiary-level school. These schools are organized in a similar manner as other Lovian public schools and follow a similar curriculum.

Retrieved from "https://nation.fandom.com/wiki/Truth_Island?oldid=197638"
Community content is available under CC-BY-SA unless otherwise noted.