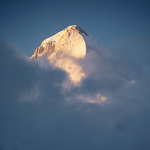 Two workmen are busy by the side of the road in East Hills. The first is digging holes, while the second follows behind, pushing the soil back in. They are working very hard. After a while a Sylvanian tourist pulls over and asks what the hell they're doing. The first straightens up and says 'Ey spose it lukes a bit furny but de lad de normly poots de trees in is off kranck.' --Semyon 09:07, March 30, 2017 (UTC)

Edward Hannis is walking in the Oceanan Mountains when suddenly he hears a rustling in the bushes. He turns around to find that it's a bear. He shouts, 'Oh God!' Suddenly, time freezes. Everything stands still, even the river. Suddenly, the spirit of God appears, and says to Edward, 'Right. I thought you were an atheist. Now what do you want me for?' Edward says, 'Well, it would be silly to ask you to make me a Christian, so could you please make the bear a Christian?' He does so. Suddenly, the bear raises his hands in prayer, and says 'Dear God, for this food that I am about to receive, I am truly thankful'. :o MyOwnBadSelf (talk) 09:38, March 30, 2017 (UTC)

A PRC board meeting: 'We should make the services to Train Village better quality' one of the newcomers says, only to be halted by a universal 'You're going off topic.' MyOwnBadSelf (talk) 09:41, March 31, 2017 (UTC)

I found that grape joke particularly funny because, when you wrote that, we had just been studying abelian groups in my algebra class. :o 77topaz (talk) 08:07, April 6, 2017 (UTC)

Often, I think humour is inversely proportional to the number of people able to appreciate it. --Semyon 14:13, April 6, 2017 (UTC)

Reread my comment, particularly the word 'inversely', which implies the opposite of an argumentum ad populum. --Semyon 15:45, April 6, 2017 (UTC)

@MOBS: Sorry. :P @Oos: Invocation of Latin-originating vocabulary provides novel dimensions of expressibility, while on occasion causing decay of comprehensibility. (Also, your sentence would have been better if you'd replaced 'Romanisms' with 'Romish befoulings'.) @Topaz: understood. I still think jokes that need some level of specialist knowledge to 'get' tend to be funnier. --Semyon 14:11, April 7, 2017 (UTC)

Why can't you make a row of words without only one word that is truely English, while I can put such rows together which are fully English though? And you still understand me though :o --OuWTB 14:59, April 7, 2017 (UTC)

@Semyon: I was thinking about my own maths class and our latest topic, which was statistics. So I tried to say something witty about intersections and unions, but eventually gave up.

I object to this :p But in all seriousness, as an admin (which is not a personal, but a community reposnibility), you could have at least told us about it. I respectfully request that you become an admin again, announce your retirement from the duty, and give a reasonable period for commentary and/or concerns before officially abandoning your solemn duty. horton11 21:00, February 8, 2019 (UTC)

Retrieved from "https://nation.fandom.com/wiki/User_talk:Semyon?oldid=199775"
Community content is available under CC-BY-SA unless otherwise noted.